Based At MRC Centre for Regenerative Medicine, Edinburgh. 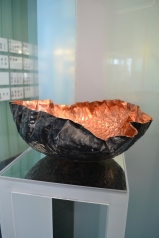 Today I had the privilege of revisiting Immersa, a copper bowl that I sculpted as part of my final project for the RSA New Contemporaries exhibition in 2013. Immersa comes from the latin word ‘immersed’, and was inspired by my time during the RSA John Kinross Scholarship in Florence, Italy.

Upon graduating in 2012, I was awarded the RSA John Kinross Scholarship to undertake 2 months of artistic research in Florence, Italy. During my time there, my focus was researching different historic sites that were linked to the ancient ritual of Baptism. I was specifically interested in exploring sites that portrayed the symbolism of rebirth and of eternal life through the ritual of healing water. I spent my time visiting holy wells and Baptisteries, all sites relating to water and its reviving properties. Water in this sense was used as a symbol for rebirth and showed a great reverence to nature. Inside each space, I recorded the aural imprints of the architecture as well as its visual symbology, which formed the basis of my final piece.

Immersa was exhibited at the annual RSA New Contemporaries exhibition in 2013. It was created through an ensemble of sound and sculpture. The final piece was sculpted as a baptismal font with the copper bowl placed at the centre. The soundscape that accompanied the work was created from a series of different sites, which I recorded in during my time in Italy. The recordings included sites in Pisa, Orvieto and Ravenna. The sounds were inspired by the acoustics of each space and formed together, emerging invisibly from within the wooden structure.

Immersa was created at the Edinburgh Sculpture Workshop in 2013. Rendered from raw copper and rescued from a nearby salvage yard, the material was sourced and crafted all from natural resources. I also received support from the Dewar Arts Award who funded the production of the project. I saw it right through it’s entire process, from a raw piece of metal, to a shining hammered bowl. The process took over 3 weeks to make and was raised by hammering the piece into the hollow of an old tree stump. It evolved from a flat piece of metal into a formed raised bowl. 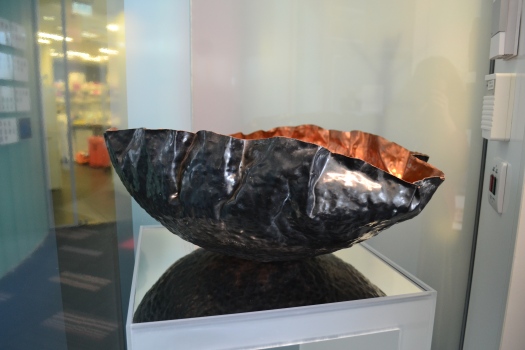 It now sits peacefully in the MRC Centre for Regenerative Medicine, as a vessel in itself. The sculpture’s roots fit nicely into the space as it too wished to articulate the symbolism behind regenerative life and healing. Immersa was inspired by the ancient ritual of Baptism, which sees water as a living organism that brings new life and renew us. It was this connection and symbolism that I wished to portray in the final piece. So it feels very fitting that it made its way to this space, and now sits in the RSA John Kinross Board Room.

You can listen to the soundscape here: